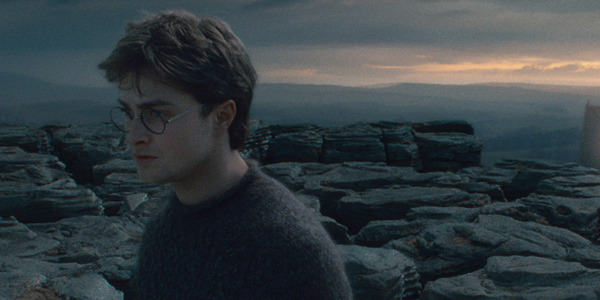 “Seems strange, mate. Dumbledore sends you off to find a load of Horcruxes, but doesn’t bother to tell you how to destroy them. Doesn’t that bother you?”

Harry should be heading off to Hogwarts for his seventh and final year at school, but with Dumbledore dead, he has no choice but to take up the hunt for Voldemort’s Horcruxes if he wants any chance of defeating the Dark Lord. His best friends by his side, Harry finds himself on the run, desperately trying to seek the Horcruxes and avoid capture.

“The movie, in other words, belongs solidly to Mr. Radcliffe, Mr. Grint and Ms. Watson, who have grown into nimble actors, capable of nuances of feeling that would do their elders proud. One of the great pleasures of this penultimate “Potter” movie is the anticipation of stellar post-“Potter” careers for all three of them.” – NY Times

“Film-goers have seen these actors grow up, and watched their performances deepen and change. Increasingly, they give the films their backbone, a central truthfulness on which all the magic hangs. Radcliffe in particular, has never been better than here, displaying new maturity and subtlety. ” – The Telegraph

“With Radcliffe, in particular, what sometimes appeared as a kind of blank perkiness in the earlier films has matured into a more profound sense of stoicism: the older Harry is in closer touch with his feelings and his fears.” – The Telegraph

This is an archived copy of Dan-Radcliffe.co.uk. We are no longer updating this site. For all the latest news on Dan, please check us out on the social media links below.